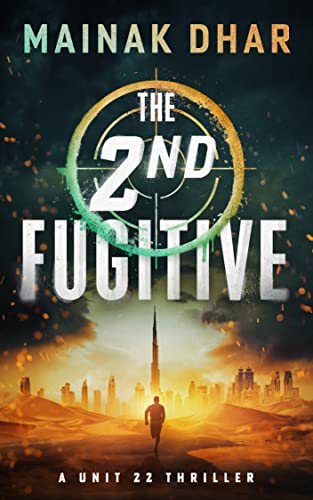 The 2nd Fugitive: A Unit 22 Thriller by Mainak Dhar

Major Aaditya Sen is now posted at a monotonous desk job but has a new task assigned by his boss Srini — to bring back the notorious underworld don Raza, from Dubai to India. The Emirates Government has agreed to hand over Raza to Indian authorities as part of their diplomatic relationships. Unlike other life-threatening missions, he was involved in so far, this one is straight forward, hence Aaditya leaves alone to Dubai without his team from Unit 22.

However, at the end of his first day in Dubai, Aaditya has badly hit Saudi Royal Guards, killed two local hitmen in a luxury resort and two Pakistani ISI diplomats on the Dubai roads. Soon there are Russian hitmen also hired to bump off the Major and Raza. With multiple groups vying for Raza’s blood and Aaditya fighting a lone war against unknown threats, will he be able to succeed in this mission forms the rest of the story.

This is the second book in the Unit 22 series, after The 1st Assassin. For those who have not read the first book in the series, instead of a separate recap, the author included snippets from the earlier book in the first chapter, so those picking this book standalone will not miss any details of the characters or the story that happened.

For those who read book 1, this is going to be a real treat, as they get to witness Major Sen’s bravery one more time, and in a better setting. Like all earlier books of the author, the action sequences are the best part of the book, especially in the first half where there are back-to-back such sequences.

The author effortlessly transports the reader into the middle of these action sequences, filled with adrenaline rush capturing even the minutest details — the arms fired and the bones cracked. However, it is not just the action sequences that caught my attention, the strategy and meticulous planning that the Major does and the research that the author did for the storyline.

The author closes all lose threads towards the end, but does gives hopes for another Unit 22 thriller, which I am looking forward to. The no-nonsense dialogues of the lead characters especially by Aaditya are impressive; while his character is an extension to what readers already witnessed in book1, Raza’s characterization and his arc are interesting.

The backdrop of Dubai and its well-known landscapes play a major role in the story. If you are a fan of spy thrillers, then this a must read and for readers of other genres, I would recommend this as a good start.

Book Review - To You, With Love by Shravya Bhinder

Book Review — Making Excellence A Habit: The Secret to Building a World-Class Healthcare System in India by V. Mohan