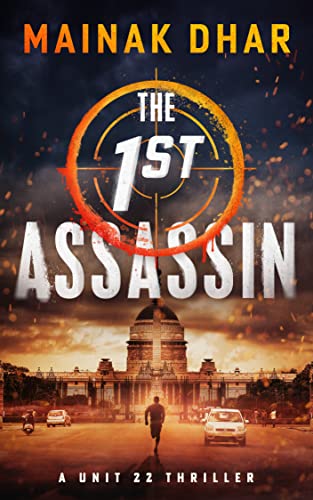 The 1st Assassin: A Unit 22 Thriller by Mainak Dhar

Major Aaditya Sen is suffering from Post-Traumatic Stress Disorder (PTSD) after his last mission where he lost his team members in a gruesome attack. He is also guilty that his stress and suicidal tendencies are the reasons for the relapse of his mother’s cancer. As his seniors at work suggest him to seek a therapist and assign him to a desk job, Aaditya struggles to overcome the demons of his past.

The US President is expected to visit India for an official tour and there is intel about a possible terrorist attack, so Aaditya is invited to work along with the US intelligence teams. As Aaditya tries to solve the puzzle around him, the perpetrators are always one step ahead of him. Will Aaditya be able to find if the intel is valid, who is the target of these attacks and the mastermind behind these, forms the rest of the story.

The story is a racy thriller of an Indian army Major trying to solve the clues of intel at hand to catch the terrorists and burst their plan. While the story starts with one piece of clue that is shared by an informer, the protagonist must escape multiple life-threatening attacks, think ahead of his enemies and ward off any information leaks to be successful in this mission.

I read 2 thrillers from the author Mainak earlier(Sniper’s Debt and Sniper’s Eye) and both of them had been absolutely amazing pieces of fiction. While this story starts well and has strong characters, a part of the suspense is revealed early and then on the plot gets predictable and easy to guess for regular readers of this genre. The action sequences are however highlight of the book as the author vividly describes them capturing the minutest details.

The protagonist character has been very well designed, and stays true to the hero vibe we expect from an army Major. What I loved most about this story is the way the humane side of army personnel is depicted, how the trauma of losing their team members can plague them for a lifetime and how being in the services is not as rosy and dreamy as it is sometimes depicted to be.

The supporting characters do not get the same graph and impressive journey as Major Aaditya. At almost 300 pages, the book still feels like a quick read as it captures the reader’s interest for the most part. If you are a fan of army and intelligence thrillers, then it will make for a good onetime read.