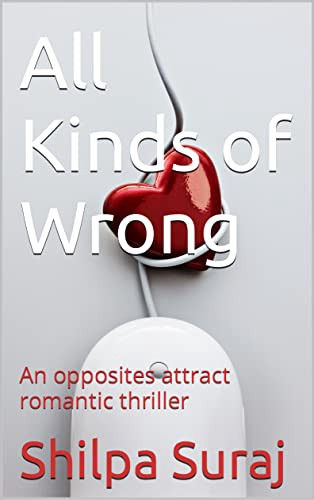 Book Review — All Kinds of Wrong by Shilpa Suraj

All Kinds of Wrong by Shilpa Suraj

Alia Dubey is being stalked, but the police refuse to accept her claim seriously owing to lack of evidence. Alia’s elder sister Aria requested her friend Avinash Rathore to help crack this mystery and catch the stalker; Avinash worked in the Indian Intelligence Agency and is on a month’s leave from work.

Alia is as weird as a person can get, always dressed in white from head to toe, with a home looking like snow; owned a lifestyle consulting firm that helped celebs align their chakras. Alia does not have friends, never have been in a relationship, not even acquaintances in her apartment; there are no known or unknown foes.

The stalker seemed harmless until an eye is sent to Alia in a parcel; will Avinash be able to find and restrain the stalker before he/she gets to Alia? Will two completely opposite personalities like Avinash and Alia fall in love, in the middle of a tense life situation, forms the rest of the story.

Alia Dubey is Aria Dubey’s younger sister, whose story was covered in the earlier book in the series — The Right Kind of Wrong. I earlier read and loved the story of Aria and Karan and while I expected both to have supporting characters in this story, I am glad Karan has an important part in the second half of this book.

The characters of Alia and Avinash are the strength of the story as Alia carries a certain aura of intrigue that will keep the reader hooked to the narration. The story buildup in the first half also keeps the reader guessing about the identity of the stalker. As with every book, author Shilpa weaves a back story of childhood abuse of Alia and how her mother’s nonchalance and her own mental agony affected her adult life.

However, I would have liked more logic in few sequences involving the stalker as the narrative depends too much on Avinash and Karan’s ability to keep Alia safe and catch the stalker instead of using technology, like install CC cameras at her home and office. If these can be ignored, the story entertains thoroughly with strong protagonists and a racy narration.

Book Review - Vijyant at Kargil: The Biography of a War Hero by V N Thapar and Neha Dwivedi