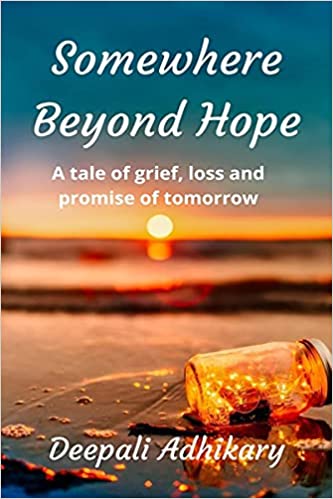 Book Review — Somewhere Beyond Hope: A tale of grief, loss and a promise of tomorrow by Deepali Adhikary

Somewhere Beyond Hope: A tale of grief, loss and a promise of tomorrow by Deepali Adhikary

Jenny always thought she and her mother Preeti’s story is a ‘happily ever after’. She did not know who her father was or remembered him visiting her ever; that never bothered her. But Preeti wanted to give Jenny the perfect family, and she thought marrying her colleague Prashant will make her family complete. Prashant was an ex-army person, who never experienced any family emotions because of his strict father and was only taught to lead a disciplined life.

The friction between Prashant and Jenny was visible from day one, as Prashant assumed Jenny is a spoilt brat whose behavior needs to be mended, while Jenny saw her beautiful world crumbling down as Prashant entered their lives and slowly changed it.

Jatin is the only child of his parents Meena and Arijit, who are highly successful but were always busy, and are now on the verge of separation as they drifted apart from each other. While everyone around him thought Jatin had the perfect life with loving parents, Jatin started feeling extremely low from the time he came across the news of his parents’ separation.

Jenny joins Jatin’s school as his senior due to pressure from Prashant to join a better school but turns reclusive after leaving behind her old friends. What turns will life take for Jenny and Jatin as they struggle with family trouble forms the rest of the story.

The book has four chapters, each concentrating on one character; the story starts slow and picks once Jenny and Jatin start interacting while commuting in their school bus. The story highlights many important issues like child abuse and its effect on an individual even after they grow up, effect of separation of parents on the kids. The most important topic however is grief, loss and hope in a situation of absolute despair. It is commendable how the author spins narration around such a sensitive topic, with ease.

The story gets cliched at times, but the emotional part is what keeps the reader going. The writing is simple, and the topic picked up has a good message which holds the reader’s interest in the second half. Pick this one for a good read on introspecting about life choices and coping with grief and loss.

This post is a part of Blogchatter Half Marathon

Book Review - New York to NEW YOU : THE 31/7 ODYSSEY by Manoj Gupta