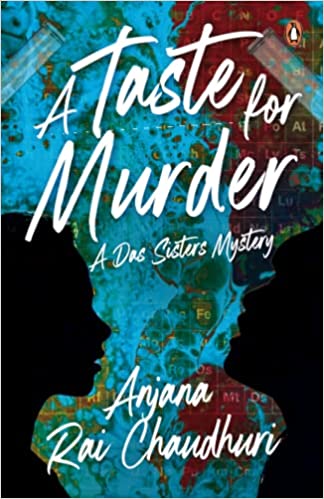 Book Review — A Taste for Murder by Anjana Rai Chaudhuri

A Taste for Murder by Anjana Rai Chaudhuri

At the Temasek University of Singapore in 2011, DW a Korean post-doctoral person at the chemistry department, suffers food poisoning after having lunch from the Indian food stall owned by Lily Das. In the next 2 days, DW is found dead at his quarters and Lily’s stall is sealed for suspicion of food poisoning.

Based on inputs of Bill, another researcher at the same department, Lily informs her sister Dolly Das, an inspector with the CID branch, to probe further into the death of DW. On further investigation, Dolly finds that DW has been poisoned by a chemical from the laboratory.

As Dolly and her team intensify their search for the culprit, there are more deaths and poisoning incidents that happen at the chemistry department, destroying the reputation of the University. There are evil family members who are hell bent on avenging the victims, old students who have past grudges to settle — the list of suspects increases as Dolly digs deeper into the case.

With jealous colleagues spying on her investigation and personal interest in these victims for Dolly, will she be able to catch the culprit forms the rest of the story.

For a murder mystery, the investigation goes at a medium slow pace; the story revolves not just around cracking the mystery but about the families of each of these victims and how each of them react to the circumstances. It is interesting how the author weaved the story around characters who seem random at the beginning but all of them have connections that are revealed as the story progresses.

The author’s personal experience and background in Chemistry shows up in the detailing around the modus operand of the murders and the authenticity of the functioning of a Chemistry department in a university. Though I did not read the earlier book in this series, the author does add enough background about the repeating characters, hence this book can be read standalone.

The author builds an atmospheric narrative for the story, especially the incidents that happen in the university campus. If the reader is a veteran of crime thrillers and murder mysteries, then guessing the killer(s) becomes easy midway, but the narration style and the main characters Dolly and Lily kept me hooked to the story till the end.

Book Review — Once Upon Us by Abhiishek Mohta

Book Review — Let the Reason be Love by Tuhin A. Sinha