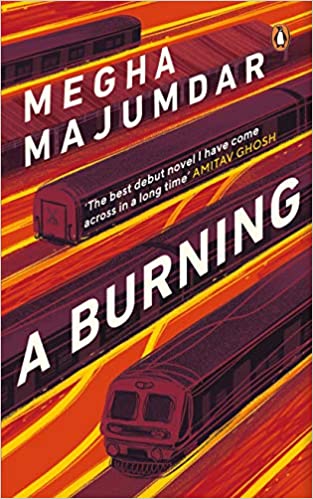 A Burning by Megha Majumdar

Jivan, a Muslim girl residing in a slum near a railway station and working in a Pantaloons store, posts a controversial comment on Facebook hoping to get some likes. Little does she know that this frivolous act of her will change her life forever; she gets picked by police in the middle of the night from her house and charged for a recent incident that happened at the railway station — a train was set on fire leaving hundreds dead. Jivan was spotted exiting the station with a packet in her hand on the day of the accident, she befriended a terrorist recruiter on Facebook and had chatted with him multiple times turning her into the prime suspect and hence also branded a terrorist.

Lovely, a hijra aspires to become a successful actress one day; she attends acting classes by saving money blessing babies and brides in their area and on other days begging in local trains. Lovely is Jivan’s only hope for an alibi as Jivan was at Lovely’s place on the day of the incident.

PT Sir, the teacher from the school where Jivan studied till tenth was once a sympathizer of Jivan, who hoped to be her mentor and groom her to be an athlete. He accidentally attends a right-wing political parties rally and even before his wife could believe starts ascending the ranks in the party. How is PT Sir’s aspiration to climb the life ladder connected to Jivan’s life and will Lovely help Jivan at her crucial time forms the rest of the story.

Though the story starts with the train accident and Jivan getting remanded, the actual story has three parallel threads, one of Lovely’s hard work to be an actress and the harsh reality of her struggle for survival; second of PT Sir grabbing every opportunity to get associated with a political party; third of Jivan narrating her past and her life from childhood till the day she was spotted exiting the railway station after the accident.

The author has done a remarkable job for a debut, firstly by picking a difficult backdrop, contrasting characters and weaving a story involving them in the narration. Each of the main characters signify the stereotypes society associates with individuals — Lovely is never identified for the person she is or her immense acting talent, her identity stops at her being a transgender. Jivan’s religious identity becomes her drawback as she is branded as a terrorist; labelled as a rebel and anti-national while she was at the receiving end of injustice all through her young years. PT Sir portrays the greed and the low people can stoop to in a hope of quick fame and money.

Jivan’s struggles and her life in the jail so are the taunts Lovely bears everyday are a mirror to the life of millions in this country. The author presents the raw reality without sugar coating facts, so the story is heart-wrenching at places. Though the pace is slow in the first half, the seriousness weighing down the reader, the hard-hitting truth will leave the reader with a bitter taste by the end. Pick this one for a brutally honest story of the times we live in.

Book Review — Eye on You by Kanchana Banerjee