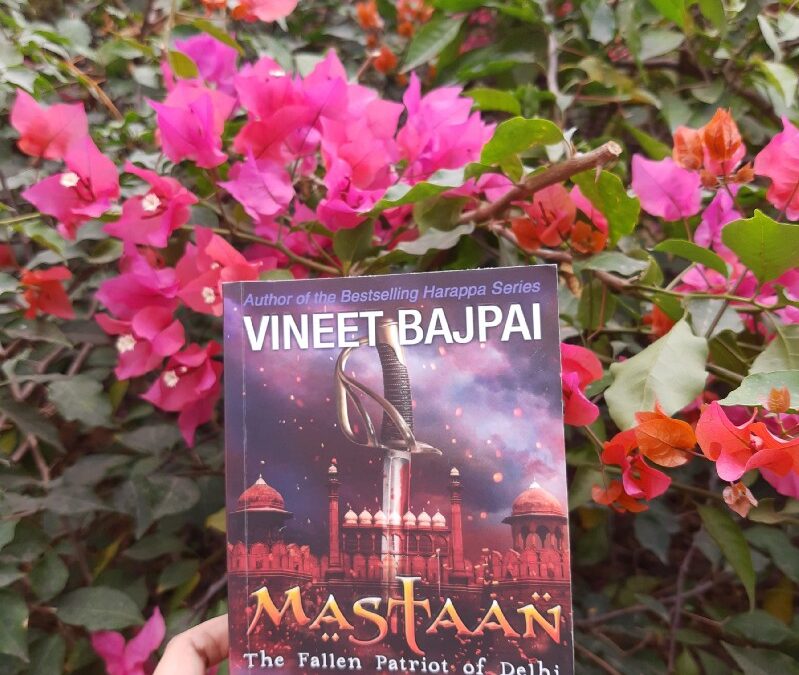 Mastaan: The Fallen Patriot of Delhi — by Vineet Bajpai

An imperial monster masquerades as a mercantile company. From gunpowder to opium, the East India Company uses every weapon to bring an entire sub-continent to its knees. Even Tipu, the fearsome Tiger of Mysore, falls prey to British military might.
As a century of deceit and cruelty unfolds — the oppressed thirst for retribution.
Delhi is the first to drown in blood, as a violent sepoy uprising engulfs all of Hindustan. The seat of the crumbling Mughal empire emerges as the epicenter of the ghadar.
An unforgettable poet laments the destruction of his beloved city and a senile Badshah’s eyes gleam with unreal hope, as both sides of the Laal Qila witness terrifying bloodshed and historical battles.
And amidst all the cannon-roars, brutal duels, intoxicated mushairas, ravishing courtesans, haunted treasures and bloody battles — unfolds the immortal love-story of the magnificent Mastaan & the beautiful Fay.
Did one man really change the course of history’s greatest war for freedom?

Vineet Bajpai is one of India’s most popular and commercially successful authors. Counted among the 75 greatest Indian writers of all time, his books have touched the hearts & lives of millions of readers worldwide.

A Nielsen chart-topping author, Vineet has written six books before Mastaan. His business and inspirational books Build From Scratch (2004), The Street to the Highway (2011) and The 30 Something CEO (2016) have been highly acclaimed.

Vineet’s fiction novels, the best-selling Harappa Trilogy, sold over 1 lac copies within 12 months of release and are counted among the biggest blockbuster novels in the history of Indian fiction.

Film-rights of the Harappa Trilogy have been acquired by one of the largest film production houses in India. A regular speaker at the Jaipur Literature Festival and other international literary events, Vineet’s books have been translated into several languages.

Mastaan — The Fallen Patriot of Delhi is Vineet’s seventh book.

The year is 1857 — the year when Hindustani sipahis collectively showed their dissent towards their British lords, as they refused to bite the cartridges supposedly greased with cow and pig fat. When they attempted a mutiny against the oppression, the forced religious conversions, the entire idea of a merchant company slowly turning the locals into slaves and ruthless show of power and might. Mastaan Pandey, cousin of Mangal Pandey, who was serving in the Delhi regiment, was known fondly as Bandookbaaz, and was one of the greatest warriors of his time. Mastaan was conflicted in his loyalty towards the English men versus his Indian brothers, while his close friend Chhagan Dubey was up for this idea of mutiny against the East India Company.

Mastaan’s inner turmoil is because he was in deep love with Fay, the young sister of Robert D’Suza, the Commander of their regiment. Mastaan, along with his loyalty towards Robert and unflinching love for Fay is also aware that the English Lords are not going to bow down to this mutiny by a hand full of soldiers and when they attack back, the war will result in blood bath of an entire nation. On the other hand, is the aging Mughal Emperor who is still hopeful of getting a upper hand and hist lost power by resorting to anything — even black magic. On the fateful day when the mutiny spreads through the city of Dilli, what fate awaits Mastaan, his friends and his countrymen form the rest of the story.

The story starts with the falling of Tippu Sultan, and the rise of the East India Company. The story traces the incidents leading to one of the landmark incidents in the history of India’s fight for Independence. Since there is a sequel to this book, this one works for establishing the key characters who will take the story forward in the next part. The action sequences, especially those involving Mastaan and his regiment, are described with perfection. For majority of the book, the narration moves back and forth between different scenarios, thus building interest in the reader.

By making the central character of Mastaan fictitious, author takes liberty in character development to make this historical fiction interesting. The cover deserves a special mention as it summarizes the grit of the story. The author also keeps the characters as per the need without adding too many characters and confusing the reader. There are places where the story does slow a bit, as this part is intended to set the context for the next part. The author also succeeds in describing the life and culture in Dilli back in those days, in a lyrical way.

Mastaan stands tall at the center of this impressive story, with all the traits of a believable warrior and super hero. Pick this one to be taken back a few centuries in time and experience the mighty Sepoy Mutiny.

Book Review - Gangster on the Run: The True Story of a Reformed Criminal by Puja Changoiwala published by HarperCollins India