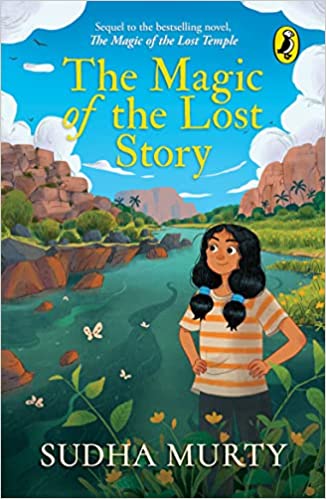 Book Review — The Magic of the Lost Story by Sudha Murthy

The Magic of the Lost Story by Sudha Murthy

Anoushka aka Nooni is bored with online classes amid the pandemic, so after staying home for more than an year, she convinces her parents to let her visit her grandparents during the winter holidays. During her last visit to her grandparents in Somanahalli, being the inquisitive young girl that she is, she discovered a hidden stepwell that brought fame to both her and the place.

Nooni’s Ajja(grandfather) and Ajji(grandmother) take her along to their relative’s place where they are celebrating multiple events — Gopal Ajja’s Sahasra Purnachandra Darshana, Yashoda-Krishna Temple Rath Yatra(Car function). Nooni tags along with her Ajja when he goes to Ibrahim’s house, to invite him to come over and start the Rath Yatra, which has been the tradition passed on from generations.

After witnessing the magnificent rath yatra, Nooni is intrigued to know the history behind the event and the significance of Ibrahim’s family being invited. As she goes to search for this, a lost story unfolds, which is unknown even to the current generation successors. Read this book to re-live the magic of this lost story and journey of Nooni to the historic places that stood witness to this story.

This is the second book revolving around Nooni, after the highly popular ‘The Story of the Lost Temple’; though the characters are repeated in this one and the story starts in post-pandemic time, there are ample references to the earlier book to help new readers with the characters and happenings. The book has beautiful illustrations, forgotten rituals and values explained in simple terms, and an underlying message of importance of rivers in human civilization.

The story also highlights how there is a world of excitement to be explored by young minds beyond TV sets and video games. The story moves around places in Southern India explaining their historic significance. The river Tungabhadra and life around its banks and tributaries that play the central character are well woven into the story.

The narration is fast paced and though there are many characters it never gets overwhelming to relate to their significance in the happenings. If there is one book you want your kid to read this year, let it be this one.

Book Review - Vijyant at Kargil: The Biography of a War Hero by V N Thapar and Neha Dwivedi