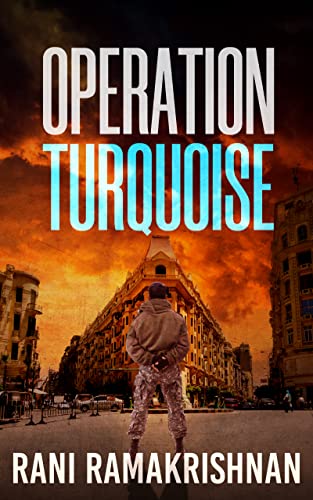 Poet, the extremist who has been shaking the world with his evil deeds, has announced on the regular radio interaction with his fans that he will cross man made borders. The Indian Intelligence sources perceive this as a threat to national security as Poet might attack on the country to free a radical leader cooped up at one of Indian jails; the Special Security Force must plan and execute a secret mission to stop the Poet’s plan.

The Major is called back from his planned holiday and is briefed about the mission — Operation Turquoise. He leaves for a foreign land with no weapons, no Plan B and no backup. Will the Major succeed in this operation as more surprises await him before he encounters the Poet, forms the rest of the story.

At less than 70 pages, this book is a very quick read; especially since the story and narration are to the point and are racy. The story in fact picks pace with each page, making it an absolute engaging read. What makes this story interesting is — the protagonist’s identity and name are kept under wraps till the last sentence, the story being set in past — in 1988, so the intelligence technology and weapons available at that time and how they were used by the Special Forces is intriguing.

The research done by the author shows in each page; while there are many spy thrillers, the unique traits of the Poet and the tactics used by the Major to counter the Poet will make the reader go aww. The proactive intelligence operations done by our country men is well captured by the author and highlights the selfless sacrifices done by the army and intelligence agents who do not even get media coverage.

Pick this one for a taut, impressive spy thriller, a must read.

Book Review — Zero Not Out: Every journey has to end, for a new beginning by Vamshi Krishna

Book Review -  You Only Live Once? : One for Passion. Two for Love. Three for Friendship by Stuti Changle