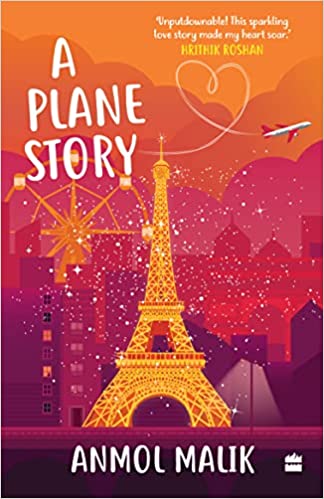 A Plane Story by Anmol Malik

Dev Thakur and Tara Nath are awkward co-passengers on a flight from Mumbai enroute Paris. Their flight gets rerouted to Heathrow airport due to a volcano eruption, spoiling their plans to rush to Paris and stop the wedding of their respective ex-es. Dev is bankrupt after failing to succeed in his startup venture but hastily bought a flight ticket for Paris with the little money left with him, hopeful for one last chance at wooing his ex-girlfriend Anagha.

Tara is also on the same flight unable to accept that her ex-boyfriend and ex-boss Matt chose Anagha over her. As their last-minute plans are interrupted by a random volcano eruption, Dev and Tara are stuck with each other on the airport till flights resume. Will Dev and Tara be able to reach Paris in time to stop the marriage and what circumstances lead to their respective breakups forms the rest of the story.

The author Anmol takes a real incident of Air travel disruption after the 2010 Eyjafjallajökull eruption and weaves a fictional story around it. The narration is pacy with never a dull moment even though majority of the story takes place in one place – Heathrow airport. The author handles this challenging aspect well, of a story that revolves around minimum characters struck at one place with multiple challenges thrown at them. This also increases the intrigue of the reader to know what happens next and how it is going to end.

Both Dev and Tara’s characters have layers which are revealed as the story progresses, of which Dev will win more accolades as he carries more suspense to his behavior. The contrast between the protagonists is also well highlighted, balancing out the fun and emotional aspects. The language is lucid and will appeal more to the younger readers.

As the story begins on a plane and moves forward in an airport, there are subtle analogies of life and travel. An interesting theme – each chapter of the book is named after a safety instruction announced during the flight travel. I personally liked the glossary provided at the end by the author for non-Hindi speaking readers to refer to, to get gist of the interesting anecdotes shared by the characters.

Pick this one if you like contemporary, light-hearted stories.

Book Review — Resolute By Design: The Story of Deepak Seth and His Imprint On Global Fashion by Rajendra K. Aneja