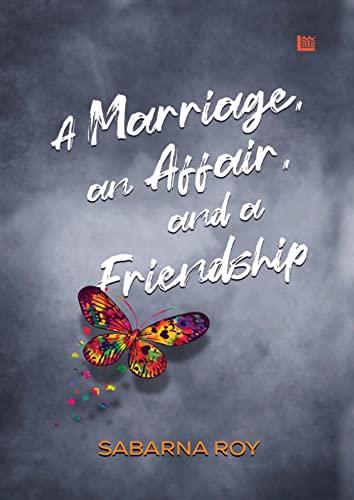 Book Review — A Marriage, an Affair, and a Friendship by Sabarna Roy

by kiranmayi
4 Comments
Spread the love

A Marriage, an Affair, and a Friendship by Sabarna Roy

Rahul is a successful technocrat married to Paromita who is also a successful career woman and they had two kids. Suroma a young journalist meets Rahul for the first time to interview him for an article she is working on. Later they have a chance encounter in a coffee shop, where Suroma brings forth a shocking proposal for Rahul — that she would like to have a son from Rahul without having a conventional married relationship.

Once the initial hesitation subsides, Rahul casually discusses Suroma’s proposal with his wife Paromita. Paromita is obviously irritated that Rahul is even considering the prospect of fathering one more son with two grownup kids. While discussing these confusions and cracks in their marriage with an old friend Samaresh, Paromita discovers that Samaresh was always attracted to her. What decisions would Rahul and Paromita take as they discover a third person eager to enter their lives, forms the rest of the story.

The story handles a contemporary and controversial concept without judging or taking sides. At less than 100 pages this is a quick read, which explores how such thoughts of one person can affect those related to them, like their spouse and kids. The story starts with the proposal put forth by Suroma and the narration keeps the reader engaged through out on how it will affect the lives of the people involved.

The story has an open ending, along with a different storyline, so it is strictly for people who like to explore new genres and themes. I would have liked the chapters to give an introduction of the character as some chapters start abruptly without the name of the character narrating that chapter. Pick this one if you like to read unconventional stories and would not judge the characters intentions if they do not fit mainstream, society approved ones.

Book Review - The Lady In The Mirror  by Charu Vashishtha Gulati