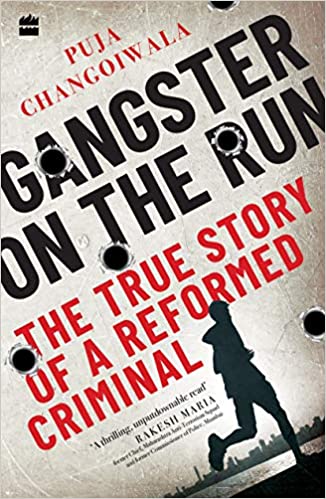 Book Review - Gangster on the Run: The True Story of a Reformed Criminal by Puja Changoiwala published by HarperCollins India

Gangster on the Run: The True Story of a Reformed Criminal by Puja Changoiwala

Rahul Ramakant Jadhav, the most wanted gangster and hitman of the late 90s is an ultra-marathoner now. Gangster on the Run is the true-life account of Rahul’s life as narrated by the author Puja, on how a notorious gangster had transformed into a marathon runner.

The story starts from the time Rahul was a young kid living with his family in Dombivli, the quaint place in the outskirts of Mumbai. As the youngest of three siblings with an honest father who was satisfied with his modest earnings, Rahul always yearned for a better life, which prompted him to get involved with the mafia gangs that were on a rise during his young days. The computer coaching that his parents hoped to get him back to academics, made him an Internet savvy extortionist and more famous than his peers.

Post terrifying his sleepy town to witness incessant gun firing, Rahul’s life reached a troubled phase when he had to spend jail term, slowly realizing how the justice system worked and how his boss treated him as one more hitman once he got captured. As he struggles with his alcohol addiction and society’s insensitivity once out of jail, how running gave this gangster a new leash of life forms the rest of the story.

Any true crime account makes for impressive story material if the author can avoid going the documentary style, and author Puja succeeds in presenting Rahul’s story with an impressive narrative style. The story wins the reader with its raw and real presentation, capturing the ups and downs of a phenomenal life led by Rahul. The story also mirrors how the adrenaline rush and easy money involved in criminal activities attracts youth, along with the long-term loss as the reader is taken through life in rehabilitation centers and dingy prison rooms.

One of the best stories I ever came across, this one is a must read not just for the thrilling story line but for the life lessons it imparts.

Book Review — Once There Was Me: The Extraordinary Life of an Unknown Indian by Bobby Sachdeva

Book Review — The Part I Left with You by Rahul Saini