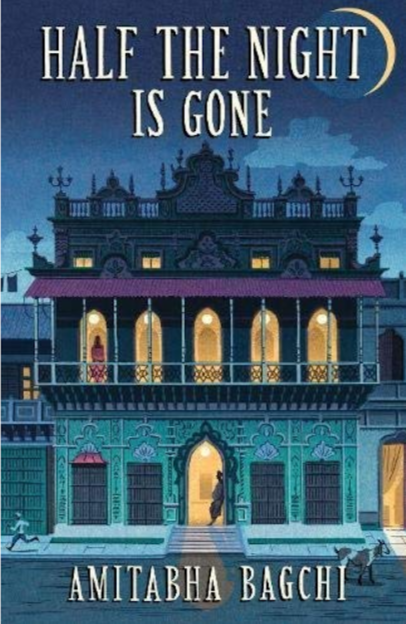 Book Review — Half The Night is Gone

by kiranmayi
12 Comments
Spread the love

Half the night is gone — Amitabha Bagchi

The celebrated Hindi novelist Vishwanath is heartbroken by the recent loss of his son in an accident. The tragedy spurs him to write a novel set in the household of Lala Motichand. It follows the lives of the wealthy lala and his three sons: Self-confident Dinanath, the true heir to Motichand’s mercantile temperament, lonely Diwanchand, uninterested in business and steeped in poetry; and illegitimate Makhan Lal, a Marx-loving schoolteacher kept to the periphery of his father’s life. In an illuminating act of self-reflection, Vishwanath, the son of a cook for a rich sethji, also tells the story of the lala’s personal servant, Mange Ram and his son, Parsadi. Fatherhood, brotherhood and childhood, love, loyalty and poetry all come to the fore as sons and servants await the lala’s death. By writing about mortality and family, Vishwanath confronts the wreckage of his own life while seeking to make sense of the new India that came into being after independence. Spellbinding and penetrating, Half the Night Is Gone raises questions of religion, literature and society that speak to our fractured times.

Amitabha Bagchi is the author of three novels. The first, Above Average, was a bestseller. His second novel, the Householder, was published to critical acclaim and the third, This Place, was shortlisted for the Raymond Crossword Book Award 2014. Bagchi lives in New Delhi with his wife and son.

My take on this book

The book traces the life of Lala Motichand and his sons during pre-independence era in India. The story mainly focuses on the socio-political scenario during early 20th century, the caste system, the gender bias, the economic disparity in the society; but the interesting and surprising twist is — this story is written by a celebrated novelist Vishwanath, who is a Sahitya Akademi Price winner.

So the book is a novel within a novel, where Vishwanath, who was always ashamed of his father who served as a cook, and his younger brother Jagannath who follows his father’s route and becomes a cook. Vishwanath repents his arrogance and behavior towards his brother much later in his life after a tragic personal loss and so starts on writing a story of Lala and his sons, with much coincidence and parallels to himself and his brother. While Lala’s story is set in pre-independence times, Vishwanath’s story is set much later.

The narration goes back and forth between the multiple years in the 20th century and between Lala and Vishwanath’s life, and overall having a strong reference to Ramcharitmanas, Ram, and his brothers. All through the book, an incident is first narrated and the reason and person behind it is revealed in later chapters.

The best part is the narration which flows so amazingly that the book has to be read in one go. In fact, this book has the best narration in recent times. The writer weaves two parallel stories effortlessly with enough parallels as well as variations while hooking the reader till the end. Every character is well built with enough depth while Diwanchand’s story is the most intense of all. While this is a family drama, each sequence has only enough characters not making it messy. The meaning of the title of the book can be realized from Vishwanth’s life and his agony. The poetry in between only adds to the beauty of the verse.

A brilliant piece of writing which is engrossing from the word go! A must read!!

Book Review - Ashok and the Nine Unknown by Anshul Dupare