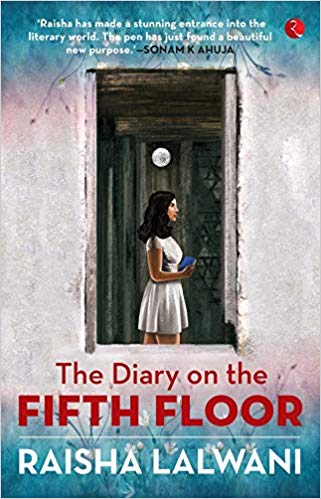 The Diary on the Fifth Floor — by Raisha Lalwani

A woman leaves her infant at home but finds her on a busy street in an unexpected turn of events.
Another woman wakes up in a flight hours later, befuddled, in the strangest circumstance.
A fascinating tale of a twenty-five-year-old woman that takes hold of us from the moment she enters the fifth floor of a hospital; more precisely, the psychiatric ward. Visibly terrified, she clutches at her clothbound diary, caught in the horns of a terrible dilemma — whether or not to hand over the diary to the doctor. She fears that she will be declared insane if her tangled web of thoughts unspooling in dark mysterious stories is read by the dissecting eye of a doctor.
What does this diary contain? As the novel progresses, we are drawn into characters and stories that are toe-curling, strange, and haunting in their raw intensity. What is the story of this woman? What secrets lie in the pages of her diary? And most importantly, what happens on the fifth floor?

Raisha Lalwani, a reader by day and a writer by night, is a content homemaker. Her passion for writing started at an early age and has been growing since. After being trained as a singer in classical Hindustani music, she later went on to get a Master’s in International Business. She has lived in Mumbai, Jaipur, Delhi, and Dubai. Her need to pen things down has lead to her debut novel, The Diary on the Fifth Floor. A fine line between fact and fiction, this book is a collection of short stories in the form of diary entries.

My take on this book:

A young woman, Savannah Khanna, meets a psychiatrist Dr. Rama Berry in her fifth floor room, though she is very skeptical initially about opening her heart to the doctor. At the end of their first interaction, Savvy ends up handing her blue diary to the doc. The diary opens up Savvy’s world, the short stories that she has been writing, unknown to anyone else, with the doctor being the first reader of these stories. Through the stories the doctor tries to understand Savvy’s psych while they keep meeting once every fortnight.

As much as the stories mirror the problem Savvy seems to have with the people and the world around her, the meetings and Dr Berry’s advise slowly help change Savvy for good, giving her a direction on what she needs from life. As Savvy gets addicted to her visits to the fifth floor and emotional dependence on talking to the doctor, the doctor helps Savvy realize who she is for real and the problem Savvy has been trying to fight all her life. The ending of the book shows how ironical life can be and why Savvy could never overcome her internal issues all these years.

The theme of the book is very different from the genres we come across. The writer keeps the suspense intact till the end of the book, with couple of meetings between the protagonist and the doctor who are the only significant characters in the story other than the ones who are part of Savvy’s short stories. In between these interactions are the stories which are very short, dark, intense and each of them have a very unexpected ending. As the book progresses, the stories puzzle the reader if each story is a piece of Savvy herself.

It’s hard to believe this is the author’s debut novel given the way she handles the complex theme and sensitively portrays Savvy and her varying emotions. The story unfolds beautifully picking up pace along with the short stories and the doctor giving insight into how the diary and Savvy are reflections of each other. The book should be read in one go to witness the suspense and Savvy unfold with each chapter.

On the flipside, there isnt enough detail on what Savvy was doing at the time of story, what she is as a person. The only channel to knowing Savvy is the diary and the doctors conclusions.

Pick this one for the unique story and for the way things unfold, with a intriguing lead character. The book stays long after its over and can stimulate the reader’s brain in more than one ways. Books around troubled minds and mental health can get tricky but this one walks the tight rope carefully!

Book Review — In Pursuit of Mi Amor by Sujata Parashar