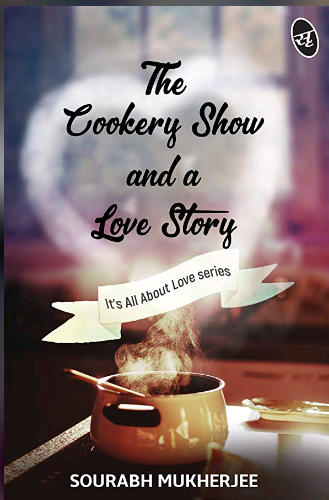 The Cookery Show and a Love Story — by Sourabh Mukherjee

“Detailed observations of human behaviour and the complexity of human relationships…” — The Hindu
Jay’s grandparents came from vastly different backgrounds and fought against the world as they carved out a life for themselves — difficult, but beautiful. Today, in the twilight of their lives, when Jay sees their never-ending fights over petty matters, he wonders exactly when and how two persons fall out of love. Jay himself has found love in Tina, a girl from his college, and it is their first Valentine’s Day together. When a disaster strikes Jay on the morning of Valentine’s Day, what lessons on love and life will he end his day with?

Sourabh Muherjee is the author of the psychological thriller *In the Shadows of Death: A Detective Agni Mitra Thriller* and *Romance Shorts*, a collection of dark-romance short stories. His books have been highly appreciated by readers, bloggers and the mainstream national media. Sourabh received the Golden Pen Award in the Monsoon Romance Contest 2014 organised by Sulekha.com and judged by an eminent panel of literary luminaries.

Sourabh speaks in several events on a variety of topics. His points of view in a panel discussion on serial killings, occult crimes and ritual killings in the Supernatural Literary Festival, Kolkata (2017) with the legendary Ipsita Ray Chakraverty was highly appreciated. He was also an invited panelist in a debate organised by Rotary Club, Kolkata on International Women’s Day, 2017.

Sourabh writes a column for *Sportskeeda*, India’s largest all-sport website. His articles have been featured in *Yahoo Sports* too.

An Electronics and Telecommunications Engineer from Jadavpur University, Kolkata with a Post Graduate Diploma in Management from School of Management Studies, New Delhi, in his day-job, Sourabh works in a senior leadership position in a technology consulting multi-national. Author of several publications on emerging trends in business and technology, Sourabh speaks regularly in various national and global conferences and technology summits.

A keen observer of human behaviour and cultural diversities, Sourabh loves travelling and has traveled across USA and various countries in Europe and Asia. An avid reader of fiction, Sourabh is equally passionate about photography, movies and music.

Jay’s grandmother loves the cookery show that comes on TV at 9PM on Friday nights while his grandfather cribs having to miss watching his favorite News shows owing to this addiction of his wife to the cookery show. Jay is preparing to propose his girlfriend Tina during the upcoming Valentines day by saving his pocket money to buy an expensive gift and surprise her with an intimate dinner.

All his plans go for a toss in the last minute due to an unexpected tragedy, which gives him a chance to remember his grandparent’s beautiful love story that stood test of time and life’s challenges. It also serves as an eye opener on how the fights and frustration shown by his grandparents are only on the surface and the underlying love is forever. Will this help Jay form a better perspective about his own life and love forms the rest of the story.

A simple story which starts with backdrop of a cookery show on TV and the family who love the show/hate the show for their own reasons, moves on to be a very heart touching love story. The story mirrors the difference in young people’s emotions over the years and how the perception of a relationship has changed over the years. Also the story highlights how a relation stands the test of time when faced with extreme challenges.

As a concept, though the story is simple, straight forward and a known one, the narration and the characters make it stand out. Any short story gets interesting if the characters can be established within the few pages which this book succeeds at.

Pick this one for a touching family and love story and for the sweet message at the end.

Book Review — I think I am in Love by Devanshi Sharma