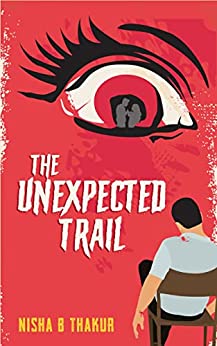 Book Review – The Unexpected Trail: Murder in the building by Nisha Thakur

by kiranmayi
2 Comments
Spread the love

The Unexpected Trail: Murder in the building by Nisha Thakur

After a steady relationship for few years, Raj has finally proposed marriage to Tanvi on their vacation, a day Tanvi has been looking forward to. However, Tanvi’s happiness is short lived as a dead body is found in her apartment as they return from their most memorable vacation. The dead person does not have a wallet or identity card on him; Tanvi, Raj, Tanvi’s best friend Neha and her husband Adi who reside in the same apartment complex — none of them recognize the dead person.

Soma is constantly abused by her husband Deven, until her father-in-law intrudes and warns his son to stop his misbehavior and sends away Soma’s son Neil to the US to stay away from their broken family. Soma pursues her passion for acting, and soon becomes a popular face in Hindi TV Serials and a household name.

How did a stranger end up as dead body in Tanvi’s flat while the flat was locked, is it a suicide or a murder, and how is Soma related to this mystery forms the rest of the story.

The premise of a stranger found dead in the protagonist’s house is a very interesting premise and the author begins the story with a bang by throwing this mystery at the reader. All the characters seem disconnected at the beginning and in the first half of the story, and it is interesting how the author connects all the threads in the climax.

Even the epilogue has some surprising facts that the author hid till the end. The story also explores human psyche and how situations and incorrect decisions can mess up lives within a moment; how lack of communication can kill relationships and careers.

The idea picked by the author is fresh and the back story weaved around it needs appreciation. However, the author falters in narrating the first half — the police start investigation of the death and immediately story moves to the past starting from Tanvi and Neha’s college times and how Raj and Adi later became a part of their lives.

This back story takes too much time to establish all the required characters of the story, while the reader will lose interest in finding the truth behind this stranger’s death. While I understand the author wanted to establish the friendship and hatred between all these characters, and what forced them to make the decisions that lead to certain circumstances, this portion could have been either edited or narrated in a back-and-forth manner.

Also, certain portions in climax like who is guilty of the crime and whom the court convicted sounded illogical and rushed to me. These aside, the second half is unputdownable and will keep the reader hooked till the last page. If you like suspense stories then pick this one to read a different story.