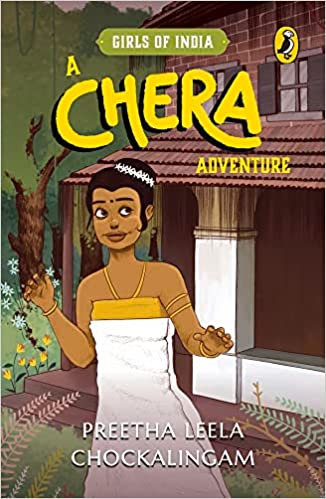 In the eleventh century BCE, in the Chera Kingdom, was a quaint village Marayur, which housed Vishwasam, the ancestral home of Sharada. She lived there along with her mother, cousins and the matriarch and her grandmother Devaki Amma, who healed people from far-and-wide. Devaki Amma also made medicinal concoctions from herbs and was well revered by the Royal family as well.

Sharada was a curious kid and often welcomed trouble because of this behavior. On one such expedition, Sharada accidentally landed in a bullock cart that transported her to the capital city — Mahodayapuram. While Sharada was ecstatic to have visited the city she always dreamt about, to be caught in a sudden war with the Chola empire baffles her. Will Sharada ever reunite with her family and get back to the peaceful life in her village forms the rest of the story.

This book is part of the Girls of India series, where each book explores the fictional adventure of a young girl. The current book is set against the backdrop of the Chera Empire, revolving around a young girl Sharada who is from a family of healers. The story chronicles her adventures first in her family house, in the nearby forest and later in the capital city. The book has beautiful illustrations that will help young minds to relate better to the story.

The story perfectly captures the culture and essence of the times it is set in, the importance and respect commanded by women as portrayed by the women in Sharada’s family. I also loved the special notes by the author at the end of the book which explains life in the Chera Kingdom. The author contrasts the difference in lifestyle of people from different faiths using Sharada and Ruthie’s characters while establishing the harmony that existed between diverse cultures many centuries ago.

All characters have their share of importance in the narration while Sharada and Ruthie walk away with the maximum footage. Except for a few sequences between Sharada and Ruthie where the pace slows down a bit, the story is remarkably interesting from beginning to end, raising curiosity for the reader with each new twist. I would highly recommend this book for young readers though adults will equally enjoy it.