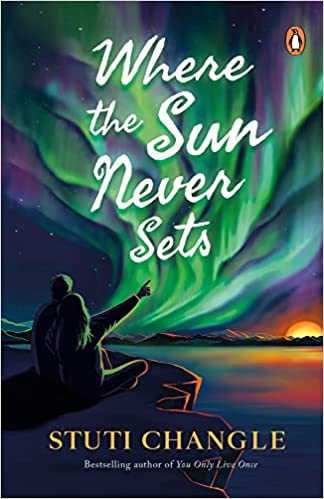 Book Review — Where the Sun Never Sets by Stuti Changle

Where the Sun Never Sets by Stuti Changle

Iti moved back to her family house in Mussoorie days before the lockdown was imposed in Mar 2020 following the Covid-19 induced global pandemic. She only has the caretaker Shyamala aunty for company as she lost her family few years ago, her only surviving family member no longer stayed connected, so did her two best friends Shelly and Nishit.

Before leaving, Iti has been given a new assignment by her boss, to write a movie script as ad jingles may see a low phase during the lockdown period. Once back home, Iti must fight the guilt of old mistakes, haunting family memories from her childhood, the uncertainty of a pandemic while working on idea for the movie script. Will Iti be able to overcome these emotional hurdles and find her calling, forms the rest of the story.

I read the earlier books from author Stuti (You Only Live Once?) (On the Open Road) and loved both of them for the coming-of-age stories, fresh characters and underlying message. Where The Sun Never Sets has a similar story of the protagonist Iti set against the backdrop of Mussoorie.

The early days of the pandemic and the uncertainty that accompanied it are well narrated by the author. The entire story reads as the diary entries of Iti, few in the timeline of 2020 while others from her school and college days, hence the story keeps moving back and forth between different time periods of Iti’s life.

Few pages into the story, it was a bit annoying when Iti keeps speaking to the diary as ‘Dear diary’ until I realized that Iti did not have anyone to speak to or share her emotions with for the longest time, which gives a new perspective to the protagonist’s emotional turmoil. I also liked the surprises the author dropped, especially in the latter half of the book, and the biggest one being the reveal in the climax.

However, before these twists are revealed, the story does get boring at places – the childhood portions of Iti. The ending albeit the big twists lack depth, especially since few portions feel rushed towards the end. Only Iti’s character gets the maximum footage as the entire story is narrated from her perspective. The significance of the title, cover and blurb are tied together well in the story.

The story has a good message about what is home and who is family. However, if you have read the earlier two books of the author, this one may not live up to the expectations. A story set during the pandemic narrated as diary entries has a lot of potential; I personally felt this potential has not been explored to the hilt. Pick this one to read the coming-of-age story of a young girl.

Book Review — My Husband and Other Animals by Janaki Lenin