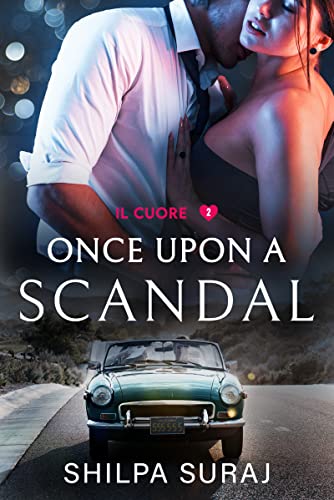 Book Review — Once Upon A Scandal by Shilpa Suraj

Once Upon A Scandal : A hilarious steamy enemy to lovers romance (Il Cuore Book 2) by Shilpa Suraj

Noted business personality Aakash Thakkar and upcoming startup co-founder Kanak Shourie, the archrivals who cannot see eye to eye feature in a scandalous sex tape that went viral, hampering Aakash’s ambition to enter politics. As Aakash resorts to damage control and re-build his reputation in the media and in political circles, he enters a business deal with Kanak as per the advice of his sister Aayushi and his PR team.

Kanak also reluctantly accepts his offer because of her personal and professional reasons, though both Aakash and Kanak have trouble forgetting the past hurt and distrust. Will the deal bring these warring opponents closer and help them see beyond their misunderstandings, forms the rest of the story.

This is second book in the Il Cuore series after Once Upon a Mistake(book1) ; in the first book Aakash and Kanak were supporting characters, but they are such opposite personalities that it is a surprise book2 in the series is centered around them. Enemies to lovers is one of my favorite romance tropes and this story wins on that front along with family emotions.

Though I would recommend anyone picking this book to first read book1 in the series to understand and relish the past dynamics of the characters, the author covered all the important aspects from book1 so even picking this book standalone will not cause any confusion. The single liners of Kanak are terrific and her conversations with Aakash are the highlight of the story.

The author explored the different shades of Aakash and Kanak with such finesse, that the reader gets a proper insight into their psyche and perspectives. The chemistry and romance between them is crackling as always with author Shilpa’s protagonists. Also, I loved Aakash mother’s characterization, as she is wary of her family reputation but is sensible about Kanak and her feelings. While Yash and Maya continue their parts from the earlier book, when compared to Yash, Maya gets more footage, as Yash makes major appearance only towards the end.

I would have loved to read either Kanak’s family’s response towards the end or her revealing the truth about her family to Aakash. Also, the sequences post Aakash getting hurt, though hilarious, felt a little dragged out of the entire story. However, the conflict in the pre-climax, the revelations about past encounters of Aakash and Kanak and Aakash’s emotional connect to his siblings, all this backstory, more than make up for the previous dull moments.

The third book will center around Ved and Aayushi’s story and the heavy conflict around their relationship is already well established in this book. I lost count of the number of books I read from author Shilpa and though all are from romance genre, character building, circumstances and conflict created makes each of them a delight to read. This book also is driven by the sparks that fly between Aakash and Kanak and most of the time, in a good way.

Pick this one if modern relationships laced with family emotions interests you.