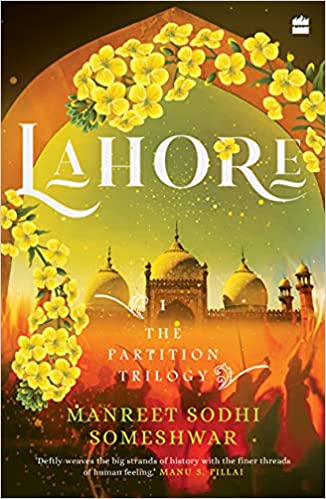 Lahore: Book 1 of The Partition Trilogy by Manreet Sodhi Someshwar

It is February 1947, Lahore. Tension is high in the air as news of Independent India may soon be a reality, along with separate Pakistan, and the future of Lahore, Panjab, Bengal still uncertain. But common people in Lahore are already sensing change in their lives, as riots and lynching are slowly taking over their daily rigor. What was once an amalgamation of people from all three religions — Sikh, Muslim and Hindu religions is slowly dismantling into alienating and killing people.

The last viceroy to India Mountbatten arrived in Delhi along with his family, to hasten the process of handing over the power to the new government. Vallabhbhai Patel is concerned about the partition plans the British government has while finally leaving India and is in deep introspection on how to avoid the country being divided into multiple parts. Jawaharlal Nehru has his own reservations on the proposed partition plan, from the Congress’s perspective.

In Lahore, Beli Ram and Mehmood lived all their lives like brothers after Mehmood’s father adopted Beli Ram as a kid, till the partition fire reached them, with Beli Ram being targeted by the local mischief makers. Kishan Singh and his children were always cordial to their neighbors, with his daughter Pammi even being a close friend of Asad. Sepoy Malik is back home after the Second World War ended, hoping to reunite with his love Tara.

As the politics are playing out with vested interests by the policy makers in Delhi, the citizens of Lahore are at the verge of a civil war. What happened in the months leading up to the Independence of India, forms the rest of the story.

The story runs in two parallel threads — one in Lahore with fictional characters and one in Delhi with real life characters, especially the leaders and politicians of those times. The tone of the book is serious and tense all through aptly mirroring the theme; the immense research done by the author reflects in the detailing. The story provides a balanced view by narrating from the point of view of different classes of people who were affected by the partition.

Partition is one incident from Indian history that has left permanent scars on the psyche of the citizens of the country and unlike a formal historical documentary, this book stands apart for its emotional connect, by narrating the humane side of Partition. The inclusion of fictional characters from all religious backgrounds helps the reader relate to how life would have been for each of them, as their world fell apart.

The story highlights how people can develop hatred and indifference for no true reason and get swayed by mass emotions. Since this is the first book in the trilogy the story only goes till September 1947 and there is more awaited in the next parts. The book is an essential read, especially for the current generation to get a more balanced view of an important historical milestone.

Book Review — That Thing About You by Abhaidev