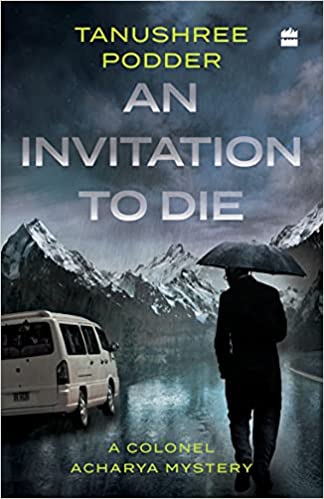 Book Review — An Invitation to Die by Tanushree Podder

An Invitation to Die by Tanushree Podder

Violet Williams is elated that her granddaughter Pia has come to stay with her in Ramsar, though her son and daughter-in-law have stopped being in touch. Pia has set up a small café and has also grabbed her first catering order for the marriage reception of the Bhandaris. As Violet is busy making plans to find a suitable groom for Pia, her van has been stolen after the marriage reception and is found whttps://blog.medhaapps.com/2019/08/book-review-before-you-breathe-by-tanushree-podder/ith a dead body the next morning. Deepal Dabryal, a guest for the marriage reception and an outsider to Ramsar is found dead which is initially suspected as a suicide.

The local police get busy trying to crack the case who are joined by the local sleuth retired Colonel Acharya. The autopsy reveals it is a murder, followed by suspects, witnesses and more deaths in the sleepy town of Ramsar. Will ACP Tim and Acharya be able to find the truth behind Deepak’s death and find the real culprits forms the rest of the story.

Like any murder mystery, the story starts with a death and the police trying to unravel the truth. I earlier read a book from the Colonel Acharya series, Before you Breathe and hence the setting and few characters are familiar. The backdrop of a hill station Ramsar helps in building the mystery as elsewhere in current days, technology would have taken a front-seat in finding the culprit versus the old school process of interrogating suspects.

The close knitted community in a small hill station, their simple habits, lifestyle adds to the atmosphere of the story. The group of woman consisting of Violet and her friends and their quirky banter adds the much needed warmth to the otherwise quaint Ramsar, so does that of the friends of the Colonel who assemble daily at Rhodo cottage for a game of bridge.

The book is strictly for beginners of mysteries as experienced readers would be able to spot the culprits early in the story. I would have liked to see more suspects and a tighter narration as the clues are obvious. The second half is where the story picks pace. The characters are well crafted with Tim and Colonel having majority of footage. Pick this one if you like to read murder mysteries.

Book Review — Life In the Sunshine by T Satish

Book Review - A People’s History of Heaven by Mathangi Subramanian