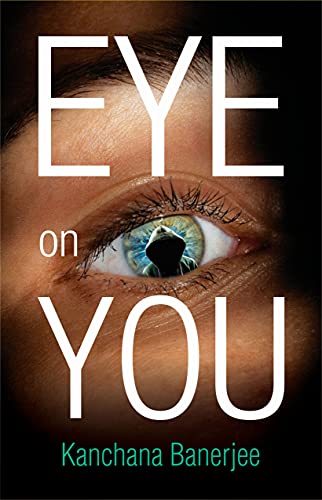 Book Review — Eye on You by Kanchana Banerjee

Eye on You by Kanchana Banerjee

The morning after a party at her house, Myra wakes up to realize she has been raped, in her bedroom, without her knowledge; as is revealed later that along with the high volumes of alcohol she consumed during the party, her drink has been spiked. Along with the 17 friends and acquaintances Myra invited, there had been 13 additional folks who walked into the party accompanying her friends. The police conclude that Myra forgot what happened that night, since there is no proof of forced entry into the house or signs of violence on her body. Will Myra be able to find what happened on that night and who the perpetrator is, forms the rest of the story.

The story is a realistic commentary of the society we live today — as the narration shifts between Myra and Dipti, the police officer, who provide their conflicting views. Dipti mirrors the section of society who are obviously jealous of the rich and influential and hence quick to judge and hate them, whereas Myra is from a generation who believes in living life without any rules or limits, working hard, and partying even harder.

The backdrop of Gurugram plays an important part in the story be it the constant reference to a city filled with smog or the landmarks. The story at the core is about the abuse of technology and social media by obsessed users who feel the need to share their lives every minute with unknown audience, strangers, and the entire world. The author highlights how technology can easily switch from being a powerful tool to a vulnerability that is waiting to be exploited by total strangers.

All the characters have been well developed, though Myra’s confidence at times borders on stupidity. The contrast, especially between Myra, Dipti and Hridi is well portrayed by the author. I also liked that Myra’s character does not turn into a detective herself, and the entire investigation remains with Dipti, as should be realistically. For those who are ardent readers of mysteries, the clues may be too obvious to identity who is playing hide and seek with Myra, though the author tries to point the suspicion towards multiple characters.

Pick this one for a racy thriller that will keep the reader hooked till the end and makes us introspect on the perils of excess online presence in today’s connected world.

Book Review — The Monsters of Mithi by Hywel Richard Pinto