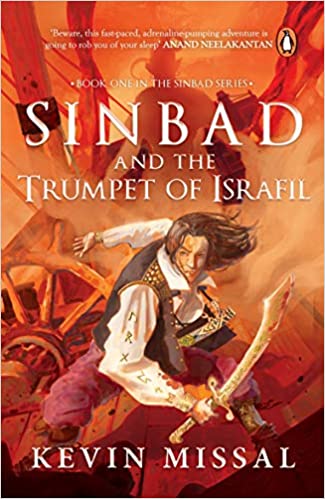 Book Review — Sinbad and the Trumpet of Israfil by Kevin Missal

Sinbad and the Trumpet of Israfil by Kevin Missal

Sinbad has seven days to save the world, to kill the only love he ever knew. Before he reaches this goal, he has multiple creatures to hunt down, being the Seid that he had trained to be. What adventures await him on this journey makes the first book in the Sinbad series.

The story keeps going back and forth in time, and that kept me engaged in the narration as there is a always a mystery waiting to unravel in both the timelines. The past has Sinbad as an apprentice to his Master Reis, as a young lad all of twelve and now four years later as a grown-up hunter and sailor. There are multiple characters distributed between the two timelines and their character graph is well etched.

After I completed reading, the first thing I had to lookup was the age for which this book was relevant. I picked it because I read earlier works of the author and liked them, but as I navigated the book I realized it is more apt for young kids and not all adults may like it, owing to the fantasy genre.

Though I read about Sinbad and his stories as a kid, I honestly do not recollect much, which was a plus point while reading this one, as I could read it as a new story without much reference for comparison. Also, since this is book one, I am looking forward to reading next parts in this series.

A special mention to the cover design which is impeccable; also, the elements added intricately inside the book on each page like the swords, set the mood for the reader. The author succeeds in retelling a well-known story by adding his own imagination and interesting elements. Pick this one for a racy adventure on the mighty seas.