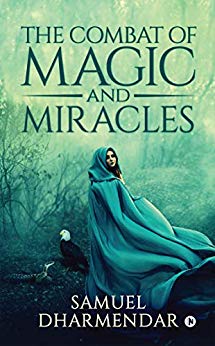 Book Review -  The Combat of Magic and Miracles  by Samuel Dharmendar

The Combat of Magic and Miracles — by Samuel Dharmendar

Since time immemorial, wars between the mighty birds and the venomous reptiles were inevitable. But when the queen of serpents, Diana, is challenged by 18-year-old Deborah, the combat of magic and miracles embark. This unfolds another chapter in Deborah’s conquest that reveals her to be from the clan of mighty birds and the only hope of being a saviour to the hypnotized Bethel Land and to resurrect the rule of King Melchizedek. Deborah is supported in this expedition by the mighty eagles and peacocks to battle against Diana and her poisonous snakes.

Her odyssey reaches a ‘love’ junction, wherein the quest takes a route of happiness. But the feel-good essence gets a striking blow that leaves the lead girl high and dry amid hindrances.

The Combat of Magic and Miracles is an enthralling journey of Deborah, filled with fantasy romance, mystical adventure and jaw-dropping twists that will keep you glued to this epic until the very last minute.

Indulge in the combat of magic and miracles between venomous reptiles and mighty birds in the land of Bethel. Deborah, who lost her mother at an early age, is raised by her loving father to be a brave-spirited girl. The serpent queen Diana captures Deborah’s father. Deborah desperately seeks the help of a king. From him, she learns she is no ordinary girl. She is the queen of birds, the eternal enemy of the reptiles. And this escalates the conflict to a never before zenith. Will Deborah win this combat?

Samuel Dharmendar is an educator and community service enthusiast. He has loved reading fantasy fictions since childhood and has fond memories of the same. He is passionate about fantasy, supernatural occurrences, magic, miracles and fairy tales. He started writing novellas at a very early age but waited for the right moment to publish The Combat of Magic and Miracles. Apart from reading and writing, he loves travelling, photography and farming. He would love to hear from his readers through email at sammygibzz@yahoo.com

Bethel ruled by King Melchizedek was once a happy and peaceful kingdom ruled by the noble and just King, and his people followed the ‘Book of Life’ to lead a fulfilling life. The greed of Diana, the Queen of serpents ruins this kingdom, who once was loyal to the King and conducted all activities of praise and worship. Diana and her followers abducted people and tortured them in her caves to gain magical powers. When Francis, a young woman Deborah’s father was sent to these caves, Deborah challenges Diana to bring her father back.

The Combat of Magic and Miracles is about the clash of good vs evil as Deborah takes on Diana and her serpents with the help of Eagles and Peacocks, the two other powerful groups in the kingdom. A war between eternal enemies The Birds and the Reptiles, but is this a coincidence or is Deborah born for higher destiny forms the rest of the story.

This story is a YA fantasy fiction with all the required ingredients of an engrossing fairy tale, and good doses of magical realism. The language is simple and apt for young kids, the story has good references to mythology and the author has showcased awesome imagination to build the scenes.

Short and concise, this one makes for a quick read for kids as well as adults who are looking for an entertaining fantasy story. And the ending of the story reveals an interesting twist to look forward to — there is a sequel in making — The Combat of Eagles and Serpents.

Book Review — Where the Sun Never Sets by Stuti Changle

Book Review - Startup Secrets from the Ramayana by Prachi Garg

Book Review — Along Came A Spyder by Apeksha Rao