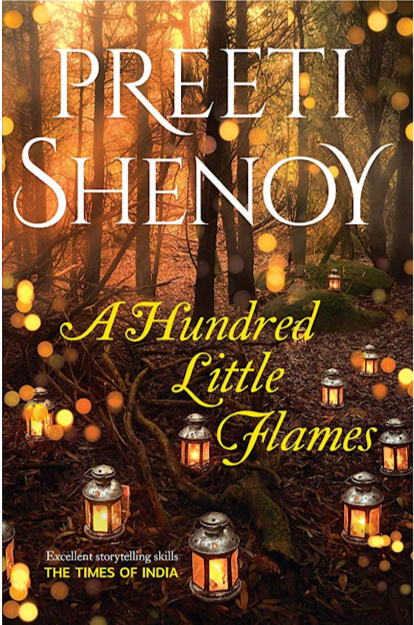 Sometimes, a journey back is a step forward.

When 26-year-old Ayan is sent to live with his grumpy old grandfather Gopal Shanker, in a tiny village, in Kerala, he is understandably devastated. What can a sleepy, idyllic village without even Internet connectivity offer a young man?

To make matters worse, Jairaj, Ayan’s domineering father has his own plans and is determined to have his way. Soon, Ayan has to come to terms with the hard realities of life and the blindness of greed as he and Gopal Shanker learn that life can sometimes unravel in unanticipated ways.

A young man, whose life lies ahead of him. An old man, whose life is all in the past. And a few months that change everything. A Hundred Little Flames is a charming account of a relationship across generations and also a meditative look at the issues of old people.

Preeti Shenoy is among the highest selling authors in India and has been featured on the Forbes India long-list of the most influential celebrities.

‘India Today ‘has named her as being unique for being the only woman in the best-selling league. In the past she has written for various publications such as the ‘Times of India’ and ‘Reader’s Digest’. She currently writes a regular column in ‘The Financial Chronicle’.

She has given several talks in many educational institutions including the IITs and IIMs. She is also an artist specializing in portraiture. Her other interests are travel, photography and yoga.

My take on this book —

Ayan gets fired from his job at a multinational in Pune, and is summoned by his super strict father Jayraj to move to his father’s village Poongavanam in Kerala to stay with Gopal Shanker who just had a fall at home. Gopal Shanker stays alone at his ancestral home Thekke Madom while both his kids Jayraj and Shaila are settled overseas with their respective families. Gopal Shanker has a very trustful caretaker Velu who had been more of family serving Gopal Shanker’s family through generations.

When Ayan first moves to Thekke Madom and had to stay with his sometimes grumpy, sometimes angry grandfather, he hardly knows what life has in store for him in the coming months. Which is also something, the reader will be curious to know at the start of the story.

As the story unfolds, the reader finds the reasons for Gopal Shanker being abandoned by his kids, his past life, the families secrets and lot more. Ayan who was reluctant to move to remote village without internet slowly falls in love with the serenity of the place, the simple living of people there against the monotonous routine in bigger cities. He is slowly floored by the actual sweet persona of his grand father, coupled with the care and love of Velu.

While the portions of story where Jayraj abandons his father and Ayan tries to rescue him are dramatic, the actual story starts unfolding post that, when Ayan starts reading his grand father’s past diaries.The reader gets insight into Gopal’s past life and truth behind a lot of his conversations with Ayan which his own kids want to believe as his old age hallucinations.

While the story drops pace a bit and gets dull when Gopal was in Hyderabad, the sequences in Pondicherry are the major highlight of the story. Again the pre-climax and climax go as anticipated, giving an overall feel-good vibes.

The locales in Kerala in Tekke Madom, the resort where Ayan’s friends stay over, the beauty of White town in Pondy are wonderfully described by the author. While the story starts with Ayan, it is realized half way through that Gopal is the actual hero of the book. The title also starts making sense towards the end only.

At a time when most of the fiction content is revolving around mysteries, thrillers or cheesy modern romances, this book is such a breathe of fresh air. The author touches on the currently rampant problem faced by elders of being neglected by their kids and what exactly a person in his late years truly desires.

The only parts I couldn’t connect with are the initial pages of Gopal’s diaries which read more as memoirs rather than diary notes. Some past day details are explained which makes the reader wonder why Gopal Shanker would explain the terms, did he mention them to be read and understood by someone at a later point.

Overall this is a very delightful and satisfying read. True Love and memories will always live inside us like A Hundred Little Flames.

Book Review — An Invitation to Die by Tanushree Podder

Book Review - Till We Meet Again by Shibaji Bose