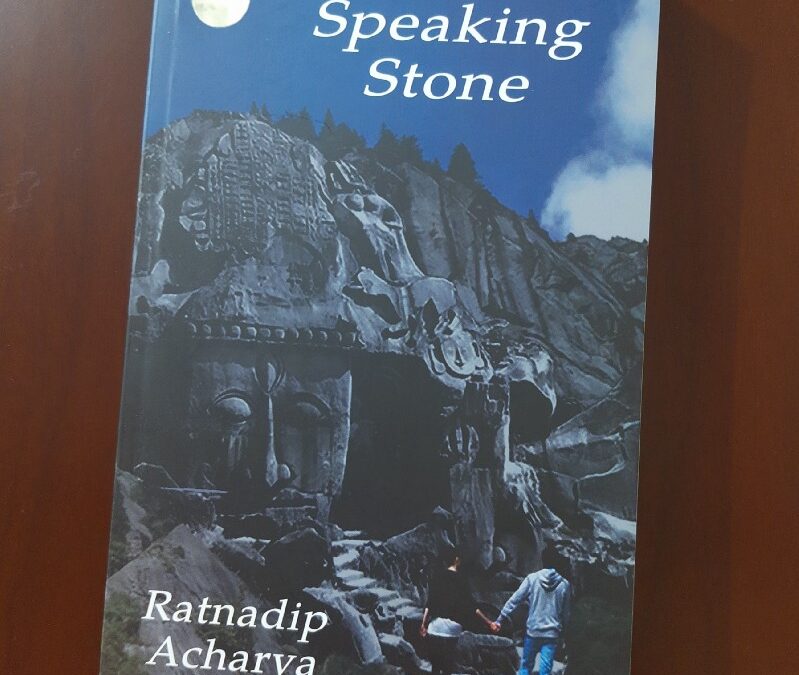 by kiranmayi
4 Comments
Spread the love

The Speaking Stone — by Ratnadip Acharya

Mumbai, December 2016: A young man found an ancient-looking piece of stone with strange images and Sanskrit inscriptions. A quest to know the origin of the stone brought him to the distant part of the country. Chandannagar, December 2016: A young vivacious historian woman read an old book on a century-old secret story about a little known part of the country. Her curiosity got the better of her as the book disappeared mysteriously before she could complete it. She reached a sleepy quaint state of the country to satiate her curiosity. Eventually they both met and their search began from the city museum to a far-flung rock mountain which revealed a century-old story of a seductive danseuse, her enigmatic lover, a string of her admirers, a painter with a photographic memory, a bird that could speak in many voices, a benevolent king and a gruesome conspiracy. And the most important clue to decode the final secret was with the missing part of The Speaking Stone But in the process of unearthing old secrets their lives were also in danger… To know more read… The Speaking Stone

Ratnadip Acharya is the author of two successful novels, Life is Always Aimless… Unless you love it and Paradise Lost & Regained. He is a columnist for the Speaking Tree in The Times of India. He contributed many write-ups in different collections of Chicken Soup for the Soul. He lives in Mumbai with his wife, Sophia and son, Akash.

He can be contacted via the following channels Website: www.ratnadipacharya.com

In a remote part of India, there is a mountain filled with stones that have been molded into beautiful and mystic creations.

A young man in Mumbai, Saikat accidentally gets his hand on a stone from an antics seller, which intrigues him as the stone has been chopped into half leaving Saikat with one vertical half. His attempt to get more details about the stone and its significance from its original owner does not yield results. Saikat gets obsessed to know about the stone and hence sets about inadvertently on an adventure.

Shuvashini mysteriously stumbles upon a book, the Rajmala in a library, that chronicles the times and lives of the Manikya dynasty which ruled the North-Eastern part of India. As she was looking for an idea for her doctorate thesis, Shuvashini also sets out to know further about the kingdom she read about.

In between the author takes the readers back to the Princely State of Tripura in the year 1900 when it was being ruled by King Radha Kishore Manikya. The King is in the process of constructing a very ambitious and marvelous palace and as with every kingdom there are unhappy souls hatching their own conspiracy plans.

The Speaking Stone is a historical fiction with equal doses of suspense and thrill as the past of a kingdom and a mysterious antic piece influences the current day life of the protagonists. The basic premise of the story is brilliant, and the authors imagination to weave a story around these characters is appreciable. However the major drawback is the slow pace as the story takes a long time to take off and to get into action. The author could have narrated the same story with a different flow to make it more interesting and appealing.

While the story will appeal majorly to historical fiction and thriller fans, a normal reader would require patience to get through some of the sequences. A more tighter narration and a faster pace could have done wonders for the otherwise good storyline. Pick this one if you are a fan of historical fiction and would like to read about a story that weaves a thriller around past and present India.

Book Review - Startup Secrets from the Ramayana by Prachi Garg